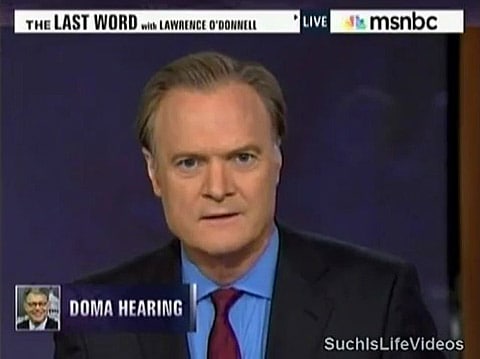 Lawrence O'Donnell looks at yesterday's DOMA hearing and Al Franken's takedown of Tom Minnery at Focus on the Family, and asks Jennifer Chrisler of the Family Equality Council, "will any facts matter at all in this debate among the opponents of marriage equality?"

In related news, EJ Graff at the Atlantic has a lengthy look at the DOMA hearings and how the atmosphere has changed in 15 years since DOMA was enacted:

Except for the fact that some of the witnesses were talking about lawfully recognized same-sex spouses, no one said anything very different from what was being said 15 years ago, when DOMA was passed.

And yet the hearing was completely different from anything imaginable in 1996. It's hard, now, to remember that foreign country, which was almost unrecognizably hostile to lesbians and gay men. No U.S. state or world nation had yet begun marrying same-sex couples. The threat against which DOMA was supposed to defend was a Hawaii lawsuit that, for a couple of years, looked as if it might open the door to same-sex marriages in that state — which might then infect other states, as mainland same-sex pairs got married in Maui and then asked to be recognized at home. The Hawaii lawsuit had hit the LGBT advocacy community, and the nation at large, by complete surprise: no gay organization supported it, and most of the leading LGBT advocates wished it didn't exist at all.