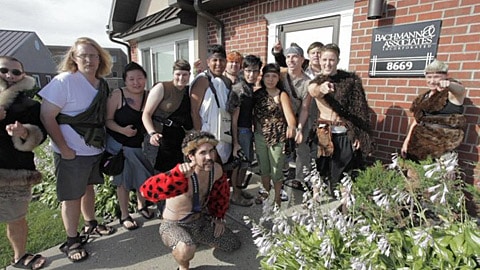 Nick Espinosa, the activist responsible for glittering Newt Gingrich, and several others today launched a colorful action at Marcus Bachmann's clinic where Bachmann is said to practice gay "reparative therapy".

Writes Espinosa in a press release:

Today a horde of gay barbarians descended upon Michele and Marcus Bachmann’s “pray away the gay” clinic and demanded that Marcus come out and discipline them for their “deviant” behavior.

Marcus Bachmann, who conducts “reparative therapy” at the clinic intended to convert homosexuals, has said that gays are “barbarians who need to be disciplined.” The horde requested to speak directly with Bachmann and experience some “discipline” for themselves.

When Marcus was no where to be found, the barbarians glittered the empty waiting room and reception area while chanting, “You can’t pray away the gay — baby, I was born this way!”

The action was organized by the same young man who threw glitter on Newt Gingrich, starting a national trend in political protest of anti-LGBT sentiments from political candidates and campaigns.

“Michele and Marcus Bachmann think gay people are barbarians?” asked LGBT activist Nick Espinosa. “I think its clear to everyone who the real barbarians are, based on the Bachmanns’ archaic views on LGBT equality.”

I expect we'll see a video of some sort soon. 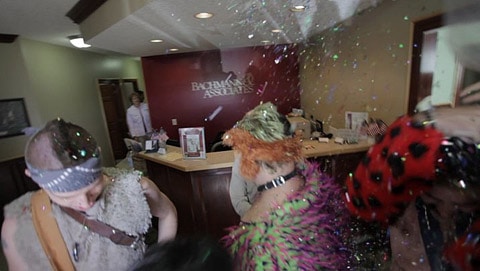