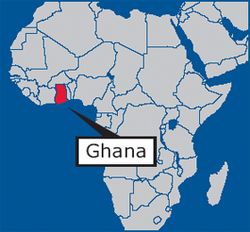 Aidooo has tasked Ghana’s Bureau of National Investigations and security forces to round up the country’s gay population and has called on landlords and tenants to inform on people they suspect of being homosexuals.

“All efforts are being made to get rid of these people in the society,” he said.

The move by the Minister follows months of campaigning by the Christian Council of Ghana which last week called on Ghanaians not to vote for any politician who believes in the rights of homosexuals.

Muslims and Christians in the Western Region have been staging protests ever since a local media report claimed there were around 8000 homosexuals and lesbians in the district.

More on this disturbing development at Box Turtle Bulletin…