David Ludwig and John Delk, a newly-relocated gay couple in Newburgh, NY, were attacked on their first night out in the town by a group of people at the Terrace Tavern on Liberty Street, the Times Herald-Record reports: 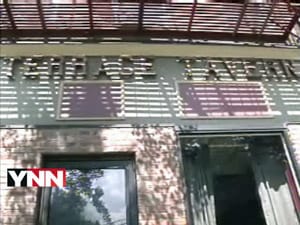 They spent much of the night at the Terrace Tavern, a Liberty Street bar. The music was terrific, and Ludwig and Delk danced and relaxed. It was after 1 a.m. when another patron noticed Ludwig's hand on Delk's wrist.

Ludwig said the man told them it wasn't a gay bar and they should leave. They refused, but finished their drinks and decided to go. Newburgh had seemed so much friendlier than their old neighborhood in Bushwick, Brooklyn.

Ludwig thinks he probably touched Delk's wrist as they walked from the Terrace, and maybe that's what drew the attention of a group of young women.

"You're gay," the women called, according to Ludwig.

The women closed in. The first punch slammed into Ludwig's cheekbone. He remembers a whirlwind of fists. He swung wildly. Delk covered his head, and the women pinned him against a car until Ludwig could fight them off.

Delk fled in shock and was found later, according to the paper:

He found Delk hiding behind bushes. Delk's knees and elbows were skinned and swollen. His glasses were broken. Blood dripped from a cut above one eye and a dark circle formed around the other. They did not seek medical attention.

Ludwig called police that night and filed a report later Saturday. He spoke with police again on Monday. Campbell said they were investigating the attack as a hate crime.

Here's another report on the attack, with an interview with the bar owner.

If I find any further details on this, I'll update.