Bishop of E. W. Jackson, a U.S. Senate candidate from Virginia and fringe religious right activist who has accused Obama of loving Islam more than he loves America, released a statement on the passage of New York's marriage equality act, accusing the government of taking a "sledge hammer" to Judeo-Christian culture and blasting LGBT activists for comparing their civil rights to those of African-Americans. 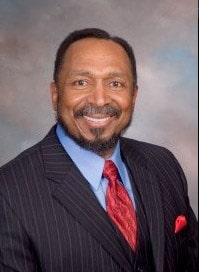 "We are witnessing the precipitous decline of our traditional value system in America. Upholding the sanctity of marriage as God intended, 'between one man and one woman' is one of the bedrock principles of our Nation. While I have compassion and pray for those who choose to lead a homosexual lifestyle, New York's decision to allow same sex people to marry is another government sledge hammer used to shatter our Judeo-Christian culture. As a black American, proud of our Civil Rights progress, I speak for most black citizens when I say it is offensive that sexual preference has been elevated to the equivalent of a racial characteristic such as skin color. The two could not be more dissimilar. One is an outward characteristic. The other is sexual behavior. It denigrates the illustrious struggle for equality for Americans of African descent to associate us with the homosexual demand that society accept and approve their behavior.

Churches, faith based institutions and organizations, the public school system, private businesses and most importantly, individual citizens will be forced to accept the new amoral and anti-Christian order or pay the consequences. Marriage counselors and adoption agencies will be pressured to condone a corrupt and degenerate belief system or close their doors to the many people they help. Marriage should be between 'one man and one woman' and children should be adopted by parents that consist of 'one man and one woman.' I am proud to have supported the Constitutional amendment in Virginia and it is clear that until there is a federal constitutional amendment, the effort to sully marriage will march forward with the help of radical homosexual activists and corrupt politicians."

Way to lobby for that NOM cash.