Via Good As You comes this stunning video of Rabbi Yehuda Levin, a NOM ally, blaming the murder of 8-year-old Leiby Kletzky on the passage of same-sex marriage, and the Jewish Orthodox community’s refusal to stand up against it. Kletzky was murdered last week by Levi Aron, a supply-store clerk and former security guard who lives in the Brooklyn community. 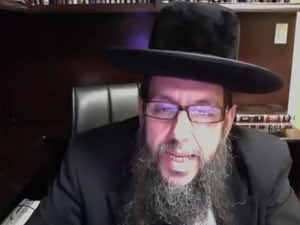 Says Levin in the video (translation via Good As You):

Why was this [death of Kletzky] allowed to happen? Let’s think about it. If we go back to the cause, the effect was he was the victim, but the cause was a Jew [Yiddish] that the evil will come to destroy you within your midst. If it would have been a Gentile, people would be able to say, ‘oh this is from the secular society.’ But this is not from the secular society. This is, for too long we have been turning our cheek, we have been turning away and ignoring the agenda of the [Yiddish] — first [gays] wanted rights, then they wanted adoption, they wanted special protections, and ultimately they wanted marriage — and we all know that we did precious little. If those three or four thousand people, at the direction of their leaders and their common sense, would have come out…against the marriage, against this final nail in the coffin of morality…maybe we wouldn’t have had to had this episode…replay itself.
…
“This came in the very aftermath of the marriage bill, my dear friends, and not doing anything.
….
“The problem with Anthony Weiner wasn’t that he inter-married in the last few years — far worse than his inter-marrying is the fact that he was pushing same-gender marriage and all the shmutz.”

Levin stood with the National Organization for Marriage at its press conference in Albany before the marriage equality bill was passed. You may also remember him for defending NY Tea Party candidate Carl Paladino’s remarks about “dysfunctional” homosexuals “brainwashing” children.