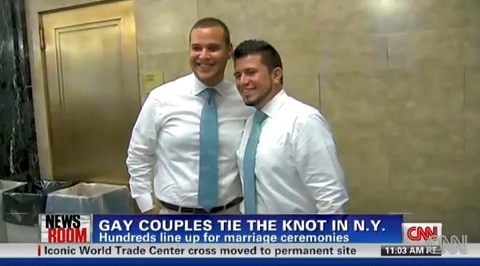 Marcus Chaljub and Freddy Zambrano were the first couple to marry at NYC's City Hall this morning.

CNN speaks with them, AFTER THE JUMP…

Our posts on marriage equality earlier today can be found HERE and HERE. Also, some thoughts from Michael Bloomberg, and across the Hudson River in NJ. 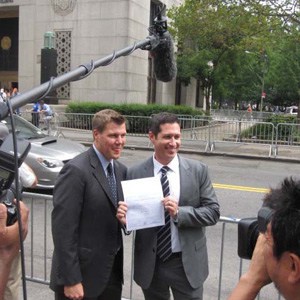 GLAAD has a set of photos from marriage equality events in Manhattan this morning (including photos (right) of my good friends Alan Miles and Drew Glick – congrats, guys!). Here's GLAAD's Flickr pool.

The NYT looks at the question of hypenation:

The question had not come up during the 19 years that Declan Lyons, 49, and Paul Czerwonka, 57, had been together. The resulting mouthful, Lyons-Czerwonka or Czerwonka-Lyons, seemed a bit much. And when the city clerk here informed them that they would have to change Social Security cards, passports and driver’s licenses, they decided against it.

The NYT also looks at same-sex couples who oppose marriage and the pressure they're getting from their parents. 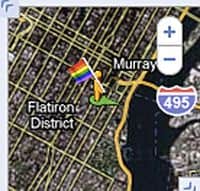 The Google Maps guy is holding a rainbow flag in New York today!

Here's coverage of the day from NBC News. And here's the AP's print  coverage.

Jeremy Hooper at Good As You has a closer look at the anti-gay protests by NOM and the Westboro Baptist Church. NOM bussed in 13 buses of people so they could stand next to the WBC and another group that had signs saying homosexuality is worse than murder. Hooper says the crowd was largely misinformed.

NY1 also took a look at the anti-gay protesters. 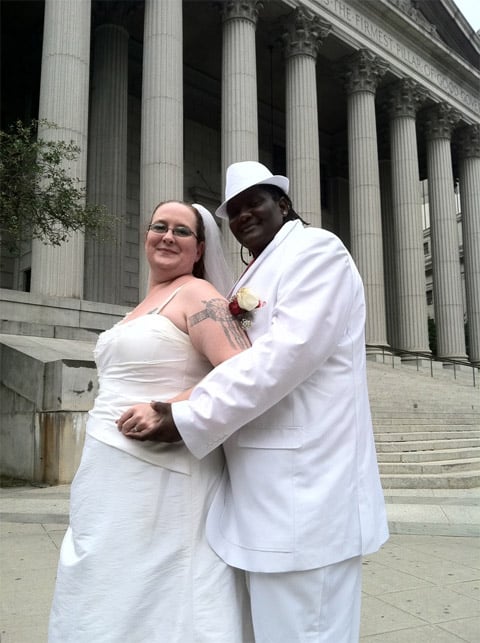 Scott Wooledge has an excellent piece up at DailyKos about his friends Jeanette Coleman and Kawane Harris (above), and their wedding today, which involves "Don't Ask, Don't Tell" and Lt. Dan Choi. The AP also talked to the couple.

Brooklyn Borough President Marty Markowitz opened up Borough Hall to host the wedding ceremonies of gay and lesbian couples (below).

Check out a great video of couples marrying and celebrating in Brooklyn, AFTER THE JUMP… 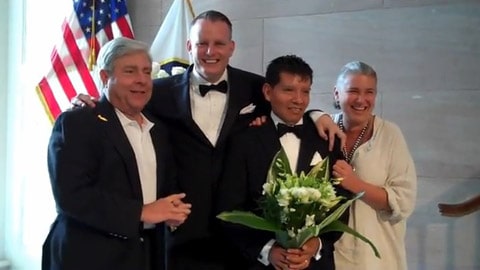 A photo of Niagara Falls lit up for marriage equality went viral on Twitter: 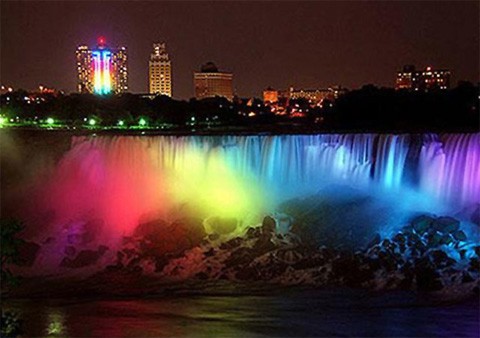 Freedom to Marry's Michael Crawford has a great slideshow up of photos of the big day.