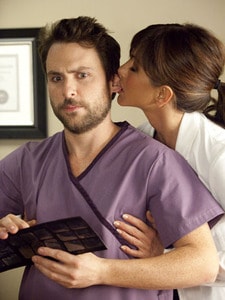 Many of you may recall a media scandal that erupted last year around Vince Vaughn’s movie, The Dilemma, in which a character describes hybrid cars as “gay.”

Vaughn and the rest of the movie’s team were roundly criticized for the joke, and were forced to make a decision on whether or not they would keep the punch line.

Many of us, including myself, were disappointed when they stuck to their guns and included it in the movie, although they did remove it from the flick’s trailer.

We now have a similar situation with a new comedy called Horrible Bosses, about three men who decide to murder their wretched higher-ups. One of those bosses is played by Jennifer Aniston, whose character calls her employee a “faggot.”

Some critics are wondering whether the term should have been included in the movie at all, but co-screenwriter Jonathan Goldstein explains their decision to keep it in the reel.

“I think part of the challenge is to, in a fairly short amount of time, get these guys to a place where an audience can empathize,” he said. “To shorthand that, we tried to think: what are the most offensive things they can say? Using a word like that I think is one of them. It says this woman is irredeemable.”

It seems to me that Goldstein and his team have the right idea: using an anti-gay epithet to convey to the audience, quite explicitly, that this character is indeed horrible, and so too are others who use the dreaded F-word.

Watch the trailer for Horrible Bosses, AFTER THE JUMP…