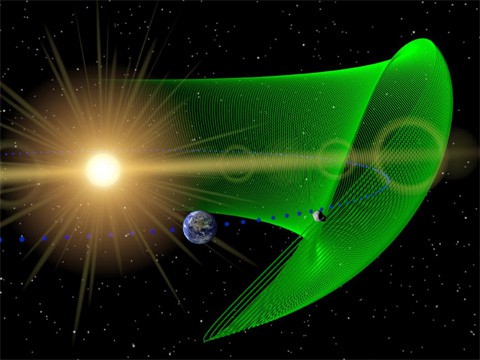 Earth has been playing "follow the leader" with a trojan asteroid for thousands of years. The first near-Earth object other than the moon to have ever been identified, TK7 shares the same orbit as our planet but about 50 million miles ahead of Earth.

Trojans are asteroids that share an orbit with a planet near stable points in front of or behind the planet. Because they constantly lead or follow in the same orbit as the planet, they never can collide with it. In our solar system, Trojans also share orbits with Neptune, Mars and Jupiter. Two of Saturn's moons share orbits with Trojans.

Scientists had predicted Earth should have Trojans, but they have been difficult to find because they are relatively small and appear near the sun from Earth's point of view.

"These asteroids dwell mostly in the daylight, making them very hard to see," said Martin Connors of Athabasca University in Canada, lead author of a new paper on the discovery in the July 28 issue of the journal Nature. "But we finally found one, because the object has an unusual orbit that takes it farther away from the sun than what is typical for Trojans. WISE was a game-changer, giving us a point of view difficult to have at Earth's surface."

The object is about 1,000 feet in diameter and should not come closer than 15-million miles, at least for the next 100 years. Astronomers say such asteroids could be useful in the future for mining precious metals.

Watch a video, showing the asteroid's orbit in relation to Earth's, AFTER THE JUMP…

Previous Post: « Bush Explains Reaction in Classroom to News of 9/11 Attacks
Next Post: Enrique Iglesias Says He Has the Smallest Wiener in the World: VIDEO »