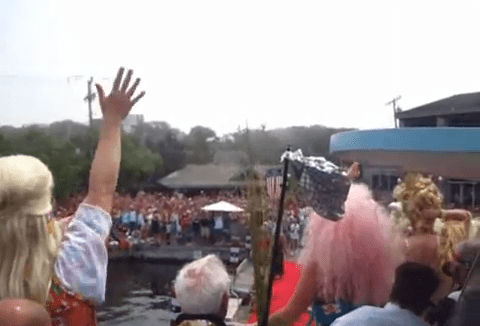 Some Americans celebrate the Fourth of July with a barbecue and fireworks, but dedicated drag queens here in New York use the nation’s birthday to invade Fire Island Pines.

While it all seems like fun and games, the invasion actually has a deep meaning.

Drag queens have always been an integral part of the bohemian Cherry Grove bar & club scene, but frowned upon and practically forbidden in the more affluent and conservative Fire Island Pines of the 70s. According to legend, in 1976 a Cherry Grove man in drag (Teri Warren) was denied service at the Botel, a Pines restaurant & bar owned by John B. Whyte (who died at 75 on March 22, 2004).

Upon hearing about this blatant discrimination against one of her sisters, the newly crowned Homecoming Queen of the Arts Project Cherry Grove, PANZI (Thom Hansen) took it upon herself to lead a small group of 9 brave Cherry Grove girls in a water taxi into the Pines harbor one hot afternoon for what they expected to be a confrontational welcoming by the Pines men.

On the contrary, the Pines men were so surprised and entertained by this “Drag Queen Invasion” in the middle of the day that they welcomed them all to drinks at the Blue Whale bar for what now is a yearly celebration and tradition.

And what a fabulous tradition it is!

Watch this year’s invasion, AFTER THE JUMP…