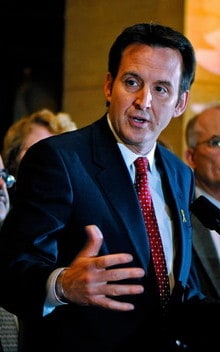 Perhaps he’s not listening to that track closely enough, because the recently glitter-bombed candidate told Meet the Press host David Gregory today that “there’s no scientific conclusion that [homosexuality] is genetic.”

GREGORY: Is being gay a choice?

PAWLENTY: Well, the science in that regard is in dispute. I mean, scientists work on that and try to figure out if it’s behavioral or if it’s partly genetic –

GREGORY: What do you think?

PAWLENTY: Well, I defer to the scientists in that regard.

GREGORY: So you think it’s not a choice? That you are, as Lady Gaga says, you’re born that way.

PAWLENTY: There’s no scientific conclusion that it’s genetic. We don’t know that.

As Zack Ford at ThinkProgress points out, the country’s leading medical groups agree that a variety of factors, including genetics, play a role in determining a person’s sexuality.

The American Psychological Association, for example, describes sexuality as “a complex interaction of environmental, cognitive and biological factors.”

Watch Pawlenty and Gregory’s exchange, AFTER THE JUMP…