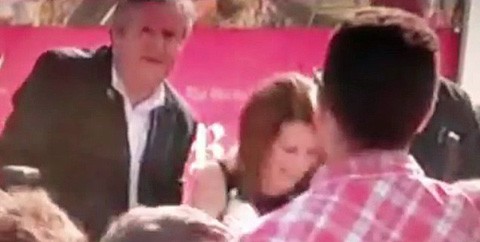 Following a three-minute speech at the Iowa State Fair, Michele Bachmann was heckled by the same man who confronted Tim Pawlenty earlier today.

The heckling began as Bachmann and her husband Marcus began working the crowd at the edge of the stage, the Des Moines Register reports:

She said she was going to shake hands but left the makeshift stage quickly when 17-year-old civil rights advocate Gabe Aderhold of Edina, Minn., loudly questioned her husband Marcus about his counseling techniques to “pray the gay away.”

Most of her three minutes consisted of frequent campaign rhetoric that she says at many of her stops, such as her chant to make President Obama a “one-term president.”

Aderhold also began yelling "shame on you" at the Bachmanns as supporters tried to shield the couple with campaign signs.