After giving a speech (and being heckled) at the Iowa State Fair, Michele and Marcus Bachmann and their security shoved the press, notably, CNN anchor Don Lemon as he was trying to interview the candidate, CNN reports: 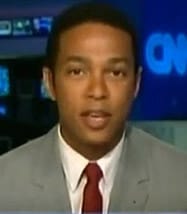 After talking for about three minutes, Bachmann waded into the crowd filled with adoring supporters. Moments later, as she tried to exit the area back to a waiting drive cart, Bachmann found herself in the middle of a mob of people: among them many supporters and members of the press including this reporter and CNN anchor Don Lemon.

Lemon says he was shoved by two Bachmann staffers, and by Marcus:

“She came out, after speaking for just a couple minutes,” Lemon said. “There were other reporters and cameras there. And I asked her very respectful questions: ‘How do you think you did in the debate last night?’ and ‘How do you think you’re going to end up in the Ames Straw Poll?’ And her two campaign aides started elbowing me.”

Lemon continued: “I told them, asked them not to elbow me. And then her husband Marcus started doing the same thing. And then he elbowed me into the cart.

And I said, ‘You just pushed me into the cart.’ And he goes, ‘No, you did it yourself.’
“It was just, I don’t know, why they would choose to do that. We weren’t asking any ‘gotcha’ questions,” Lemon added.