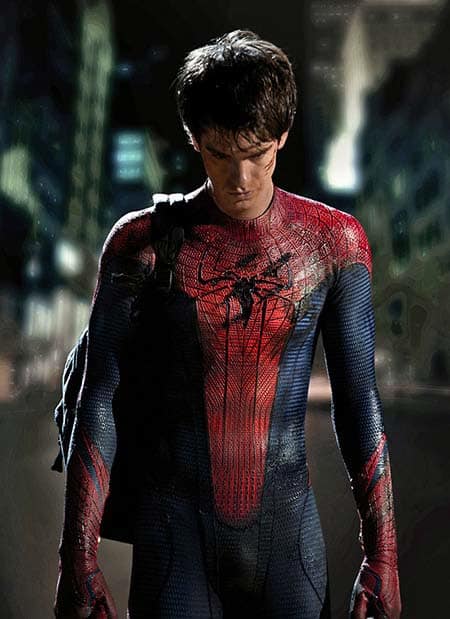 When asked if there were long conversations about whether to err on the side of being too Ken-doll androgynous vs. too bulbously revealing (especially since the film is in 3-D!), Garfield laughed and blushed some more.

“Um, yeah, there are long discussions about this stuff,” he said. “There has to be because it’s got to be handled with sensitivity. It has to be non-offensive, which takes some tools.” His words, not mine. We assume he’s talking about tools of the costume-design variety.

Ever since the nippled Batsuit brouhaha of the ’90s, the makers of superhero movies have to be careful not to offend audience’s delicate sensibilities when it comes to their crimefighter’s naughty bits. They should be more focused on Thor’s hammer than… Thor’s hammer. Garfield says he and Webb were cautious about this. ”I don’t think it should be the main attraction of the costume.” he said. “I don’t think it should be what people are focusing on.” In other words, keep it classy.

Garfield's 'crouch' is another story.

And Deadline reports that Garfield is headed to Broadway in a Mike Nichols revival of the Arthur Miller play Death of a Salesman:

Oscar-winning actor Philip Seymour Hoffman will play the traveling salesman Willy Loman; Linda Emond will play his wife, Linda; and Garfield will play Loman's underachieving son, Biff. Scott Rudin will produce the revival, which will open next March at the Barrymore Theatre.﻿﻿