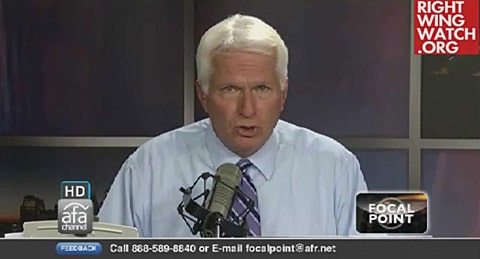 Both of the cases that went to the United States Supreme Court that dealt with the issue of whether states should criminalize sodomy, and of course they still ought to be able to do it, every state in the union criminalized sodomy until 1962 and then forty nine states until 1972, then they began to fall like dominoes. But by the time of the founding until the late 20th Century, homosexual activity was a felony offense in the United States of America, there is no reason why it cannot be a criminal offense once again, absolutely none.

Previous Post: « Lawrence King Murder Discussed on HLN as Jury Continues Deliberations in Trial of His Killer: VIDEO
Next Post: ‘I Don’t Like Boys’, a Brazilian Documentary Inspired by the ‘It Gets Better’ Project: VIDEO »