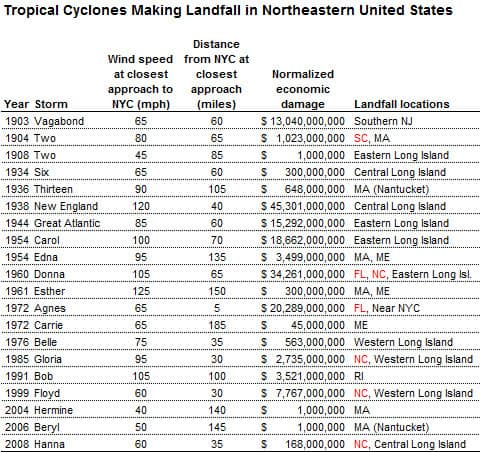 FiveThirtyEight's Nate Silver, who is usually running the numbers on political races, looks at the damage that could be caused by a hurricane striking New York City, with regard to the storms that have approached the northeast in the past.

The numbers do not paint a pretty picture. According the model, a hurricane with windspeeds of about 100 miles per hour — making it a “weak” Category 2 storm — might cause on the order of $35 billion in damage if it were to pass directly over Manhattan. Such a storm would probably flood New York’s subway system as well as acres upon acres of prime real estate in neighborhoods like the East Village, the Financial District, Tribeca, Coney Island, Red Hook, DUMBO, as well as parts of Staten Island and most of the Rockaways.

Although far from the most likely scenario, this may represent a reasonable-worst-case estimate of what could happen if Irene took exactly the wrong turn at exactly the wrong time. National Weather Service models, as of this writing, estimate that there is a 5 to 10 percent chance that Manhattan could experience hurricane-strength winds.

Read his entire, thorough and fascinating as usual, analysis HERE.

Previous Post: « Jerry Buell: ‘I Try to Teach and Lead My Students as if Lake Co. Schools Had Hired Jesus Christ Himself’
Next Post: Cat vs. Dog: VIDEO »