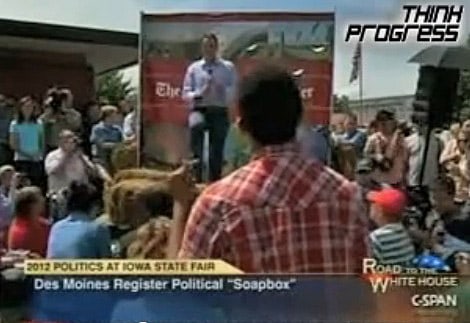 Today at the Iowa State Fair, presidential hopeful Tim Pawlenty was challenged on his anti-gay positions by a gay Minnesota resident in the audience, Igor Volsky at Think Progress LGBT reports.

"I want to know know — when will you stand up for me…because you are discriminating against me and it hurts, it really does…I support that you have your moral values, but that is something that is hurting my future and how I get to live my life…why does government get involved in our marriages?"

"From my perspective, I'm not at the point, nor will I ever be at the point, where I will say that every domestic relationship is the same as traditional marriage…The relationship between a man and a woman in a traditional marriage is important to our country, our society, our culture. I think it should remain elevated, not just in our words, but under our laws — that's why I've supported laws, in fact have authored laws, to maintain marriage as between a man and a woman."

The Hill also reports on the confrontation:

The questioner did not back down, and asked Pawlenty why government gets involved in gay marriage at all, and whether he would see a gay American as a "second-class citizen."