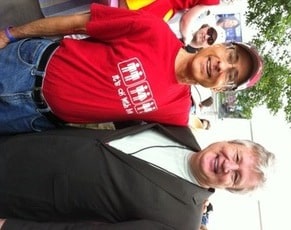 Openly gay presidential candidate Fred Karger wasn’t part of the Ames Straw Poll yesterday, but he was in Iowa, where he and Iowa State University Professor Warren Blumenfeld ran into Marcus Bachmann.

Blumenfeld and Bachmann got into quite the heated debate about how Bachmann’s wife, presidential candidate Michele Bachmann, twists religion to attack gay people and how Bachmann himself runs a clinic that tries to “cure” gay people.

Despite all evidence to the contrary, Mr. Bachmann insists, “I do not use reparative therapy, none of our clinic therapists do. What we do is we counsel; we talk to [patients] about whatever they want to talk about.”

He goes on, “There is not anything that comes close to reparative therapy.”

Bachmann also ignores audio evidence when he insists he has never called gay people “barbarians:” “I have never called the homopsexual community barbarians, that’s a myth. And when it comes to who I am, I have a never rejected a person who is gay; they can decide for themselves what they want and who they are.”

The discussion occasionally gets drowned out by an announcer in the background, but you can catch the meat of Blumenfeld and Bachmann’s discussion, taped by Karger, AFTER THE JUMP…