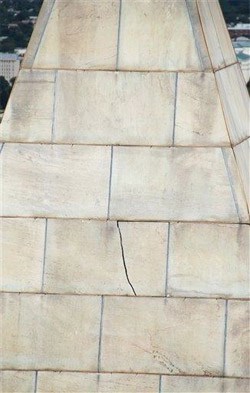 NPR on Dominionism and Rick Perry: "An emerging Christian movement that seeks to take dominion over politics, business and culture in preparation for the end times and the return of Jesus, is becoming more of a presence in American politics. The leaders are considered apostles and prophets, gifted by God for this role."

Dick Cheney says his book will have "heads exploding" in D.C.

Leonardo Dicaprio and Tobey Maguire tool around in vintage car on set of The Great Gatsby.

1978 murder cold case of gay Utah man reopened: "Tony Adams was the campaign manager for the Socialist Party in Utah and a gay-rights activist when he was stabbed to death in his Salt Lake City apartment. His murder was never solved and was just one of several violent murders of outspoken gay people in Utah during a short period of time." 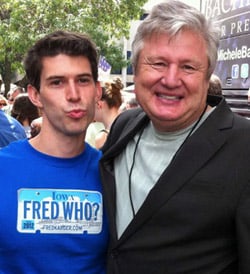 Which one of these men is gay?

Norman Rockwell White House painting sends rare message on race. "His choice of the Rockwell painting was a more private statement. Obama has never mentioned it in a speech or public event. And while White House aides confirmed that Obama approved bringing it to the West Wing, they declined to discuss how the decision was made or why.

Brooklyn Assemblyman Dov Hikind may suspend his party allegiance over his hatred for same-sex marriage: "David Weprin, Hikind's fellow Assembly Democrat, supports the right of gay couples to marry, and that's a main reason he lost Hikind's support for the Sept. 13 special election." 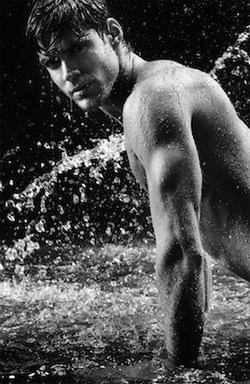 Francois Rousseau is all wet (some images not sfw)

Tabloid alleges Russell Armstrong, the Housewives of Beverly Hills husband who recently took his own life, did so in part because he was going to be outed.

Gay Elle writer Seth Plattner makes out with girls for attention: "Although my motivations may have been convoluted, in a weird way canoodling with women kept me alive to the fact that it's foolish to shut down my sexual self in the company of the opposite sex. It can be useful, even at work. Don't get me wrong; I'm not trying to kiss my way to the top. It's more subtle than that. I work at a fashion magazine, where women are my bosses, colleagues, friends. And with all of them, I'm aware that my masculinity, my attractive guyness, is part of what I offer. Obviously, my professional skills are more important, but if a coworker or superior thinks I'm cute or captivating in some way, great! That gravitational pull is mine to leverage as I can."

Previous Post: « MTV’s ‘The Real World: San Diego’ Trailer Full of Sloppy Gay Kissing: VIDEO
Next Post: Pat Robertson ‘Doesn’t Want to Get Weird on This’ But the Crack in the Washington Monument is a Sign from God: VIDEO »