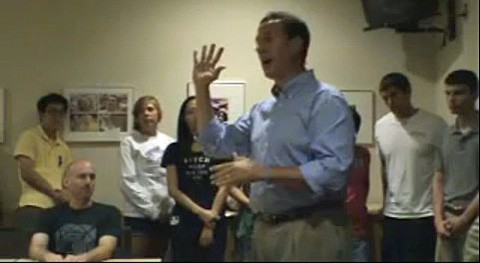 Rick Santorum held a Q&A at Penn State with students at the HUB-Robeson Center yesterday. In an exchange about his positions on homosexuality, gay adoption, and same-sex marriage, Santorum got upset that Piers Morgan called him a bigot in an interview earlier this week:

“I had Piers Morgan call me a bigot. Because I believe what the Catholic Church teaches with respect to homosexuality. I'm a bigot. So, now I'm a bigot, because I believe what the Bible teaches. Now, what 2000 years of teaching and moral theology is now bigoted. And, of course, we don't elect bigots to office, we don't give them professional licenses, we don't give them preferential tax treatment! If you're a preacher and you preach bigoted things, you think you're going to be allow to have a 501(c)3 as a church? Of course not.”

Then, a Penn student called out Santorum over falsehoods in his argument, pointing out studies by the American Psychological Association

STUDENT: "It is extremely unfair for you to say that there are no social science reports that suggest that children are okay in a same-sex relationship. There are plenty of statistical studies that they are just as happy and successful and everything else as long as they have two parents."

STUDENT: The American Psychological Association has enumerated – in 1974, that gay marriage does not prohibit (inaudible)…