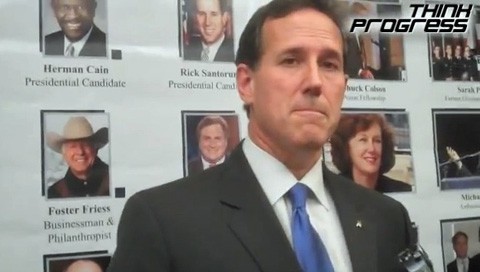 Rick Santorum atttended the Western Conservative Summit in Denver, Colorado over the weekend, but wouldn't address Dan Savage's recent video in which he threatened to redefine Santorum's first name if he continues to bash gay people, according to Think Progress reporter Scott Keyes.

Said Santorum when asked about Savage:

"I’m not going to talk about Dan Savage. He’s below the dignity of anybody. Thank you."

Santorum is, however, perfectly willing to address Savage's dignity and his Google problem when asking people for money.

As you may recall, Santorum has compared same-sex marriage to sex with dogs, has said that it's "common sense" to keep gays from marrying and adopting children, wants to reinstate the ban on gays in the military, and has said that gays shouldn't have the "privilege of government benefits" offered to heterosexual couples, yet Santorum claims he's not a homophobe.