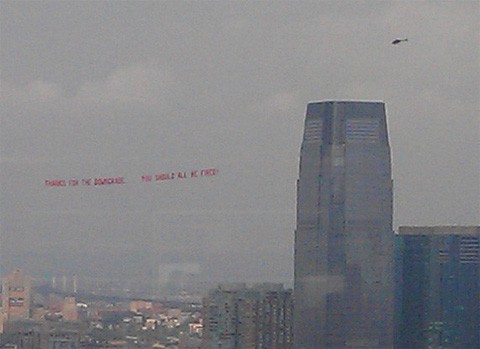 An unnamed broker from St. Louis hired a plane to circle lower Manhattan yesterday, focusing on the offices of Standard & Poors, though the original plan was to head further south:

"I originally wanted to fly it over Washington, D.C., but learned that you can't do that," she told Fortune anonymously, for fear of losing her job. "So I chose Wall Street instead, but didn't specifically intend it to fly over S&P."

"She’s not mad at S&P, she’s mad at Washington D.C.," a friend of the broker told The New York Observer, "She called me up to have me talk her out of it, and of course, I didn’t, because I think it’s funnier than s**t.”