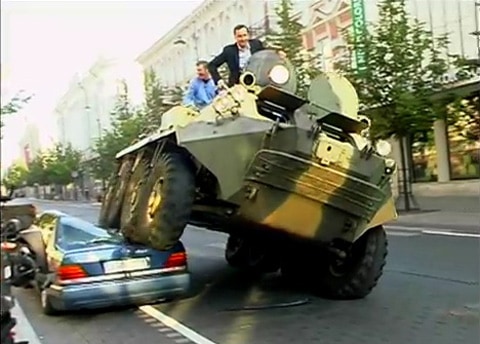 Arturas Zuokas, the mayor of Vilnius, Lithuania, has a message for those who park their cars illegally: I will crush you.

Residents are reportedly tired of luxury car owners parking with impunity and have requested the local council do something about it. In a publicity stunt to reassure the public that the city authorities is addressing the issue, Arturas Zuokas jumped in an army troop carrier and drove over an old Mercedes-Benz S-Class that had been parked in a bus lane.

“I wanted to send a message” Mr Zuokas told the media. “I want to point out that if you have a car and more money it doesn’t mean that you can park it everywhere. Recently there’s been an increase in this type of parking violations, and it shows a lack of respect for others”.