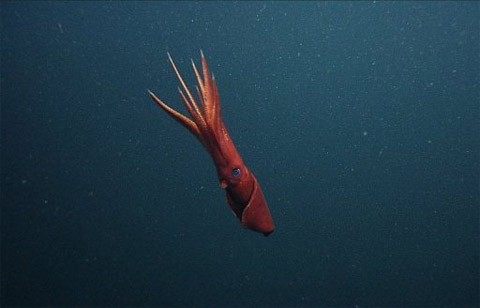 New footage and revelations about the Octopoteuthis deletron, a lonely sex-starved species:

Scientists suspect that some specimens can drift a lifetime without ever encountering a potential sex-partner, much less a soul-mate.

Yet when they do, they go for it no matter whether it's male or female:

The video footage captured 108 individuals, but scientists could only identify the sex of 39 squid, 19 females and 20 males, according to the study. None were caught in flagrante delicto, but the riddle was solved: 19 of them — nine boy squids and 10 girl squids — had clusters of spermatangia attached to their bodies, front and back.

"Males were as likely to be found mated as females," the study concluded. The sperm-carrying sex, in other words, "routinely and indiscriminately mates with both males and females."

In evolutionary terms, a "shot in the dark," as the researchers called it, would not seem to make much sense. But the costs involved in wasting sperm on another male are probably smaller than the costs of developing courtship or the ability to discriminate between sexes.