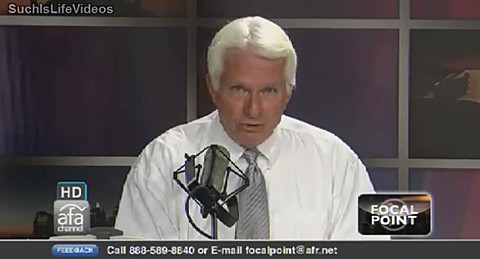 The American Family Association's Bryan Fischer finds an opportunity with the story of the discipline meted out to Texas student Dakota Ary to suggest that Ary is a hate crime victim and that the teacher created a hostile environment for Ary's religious views.

"This is a hate crime in process. Here's a pro-homosexual bigot committting a hate crime against a 14-year-old student. You know what this illustrates is that truth is now a hate crime in the twisted world of secular fundamentalists. You tell the truth about homosexuality? You've just committed a hate crime."

And, then, because Ary's teacher is German, Fischer finds an opening for his 'Hitler and his Nazi henchmen were gay' chestnut:

"Does this German teacher, when the subject of homosexuality in Germany comes up, does he tell his students that the Nazi party started in a homosexual bar in Munich?"