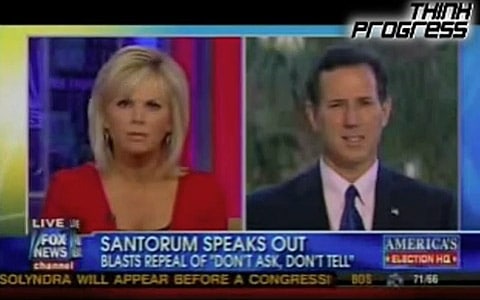 Said Santorum when asked if he stood by his remarks:

"Absolutely. We haven't even begun to see what the consequences of going to 'DADT' are going to be. The man and women who sign up for the military are now going to be placed in very difficult and uncomfortable personal situations, very close quarter situations…We got to recruit people who would want to do this and now you’re going to put them in a very odd and uncomfortable environment. A lot of people, I believe are going to leave a lot of people aren’t going to join who otherwise would have joined, and that’s going to hurt our ratings, it’s going to hurt our ability to defend this country, and we shouldn’t be playing social experimentation….There is no role for playing sexual experimentation games in the United States military."

Previous Post: « Scientists Begin Visually Reconstructing What Our Brain Sees: VIDEO
Next Post: Chaz Bono and Lacey Schwimmer Talk About ‘DWTS’ and How the Attacks Have Affected Him: VIDEO »