Dane Hall, a 20-year-old gay Salt Lake City man, had his jawbone broken in three places, lost six teeth, and was hospitalized for four days this week after being attacked outside one of the city's nightclubs, Q Salt Lake reports: 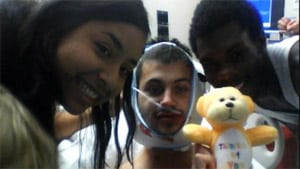 Hall said he left Club Sound, which is gay-themed on Friday nights, and crossed the street to the corner of 600 W. and 200 S. in Salt Lake City, when four men approached him and began yelling gay slurs. He was then punched in the back of the head and knocked to the ground. One of the assailants grabbed his shirt and began punching him in the face, he said. After Hall fell to the ground again, the attacker grabbed him, placed his open mouth over the street curb and stomped on the back of head, knocking out six teeth in a move commonly referred to as ‘curb checking,’ which can result in death in many cases. Two other assailants kicked him repeatedly in the stomach, Hall said. The attackers called him a ‘fag’ and took his identification and $40, he said.

“I could have died. And a piece of bone from my jaw was jammed in my brain, to make things worse,” Hall said in email correspondence because his jaw is still wired shut after the attack. “If anyone has any information leading to the arrest I am offering a $10,000 reward.”

Salt Lake City police are looking into the attack. Anyone with information about the assailants or any possible leads are being asked to call the Salt Lake Police Department at 801-799-3000.

Previous Post: « Log Cabin Republicans Will Ask 9th Circuit Today to Declare ‘DADT’ Unconstitutional
Next Post: Troy Aikman Still So Mad Skip Bayless Called Him Gay 15 Years Ago He Might Beat Him Up if He Sees Him: AUDIO »