One day after Maggie Gallagher was replaced as Chair of NOM, the organization has announced a new project she's involved with — the Marriage Anti-Defamation Alliance (MarriageADA).

Because "traditional marriage" supporters are the real victims, right? 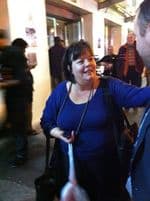 Gallagher is listed among the primary staff, along with Damian Goddard, the American Independent reports:

MarriageADA is described as a ”supportive community for those who have been threatened for standing for marriage, to nip the climate of fear being created in the bud, to expose for fair-minded Americans on both sides of the  debate the threats being made, to conduct high-quality qualitative and quantitative research documenting the extent of the harm, to develop legislative and community proposal to protect Americans right to engage in the core civil rights: to organize, to vote, to speak, to donate, and to write for marriage.”

It is a (tax-deductible) nonprofit financed by the NOM’s 501(c)3 arm, the NOM Institute.

MarriageADA is is representing author Frank Turek, who has written three books about religion, public policy and same-sex marriage. The latter — “Correct, Not Politically Correct: How Same-Sex Marriage Hurts Everyone” – is the subject of a consumer complaint MarriageADA has filed against Bank of America in North Carolina. In a video, Turek claims he lost his leadership-training contract with Cisco and Bank of America because of the book.

Watch Turek's video, AFTER THE JUMP…