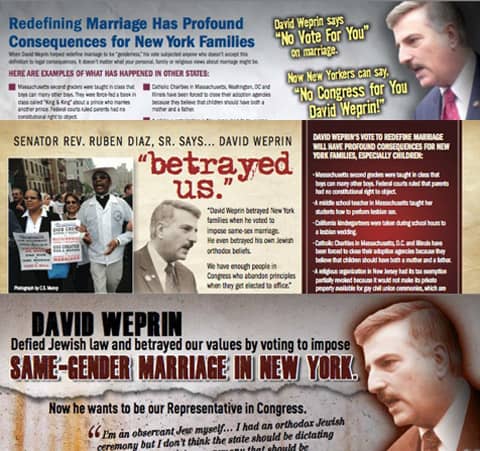 Good As You looks at the faith-attacking flyers NOM is employing in its campaign against pro-equality candidate David Weprin in the special election race for Anthony Weiner's seat which voters will see at the polls tomorrow. NOM is spending $75,000 to try and defeat Weprin.

Turner, a businessman, leads Weprin, a state assemblyman, 58%-26% among voters unaffiliated with either major political party, according to the survey released Sunday by the left-leaning Public Policy Polling firm. The poll notes that Obama is highly unpopular in the heavily Democratic district that takes in Brooklyn and Queens.

"If Turner wins on Tuesday it will be largely due to the incredible unpopularity of Barack Obama dragging his party down in the district," says a PPP memo on its poll.

A Siena Research Institute poll last week on the race showed Turner with a six-point lead.

"I praise the Lord that the National Organization for Marriage has given me opportunities to robo-call and send mailings to the voters in the 9th Congressional District about my support for Bob Turner's pro-family values. These efforts will empower Bob Turner with real support from New York's Hispanic community."