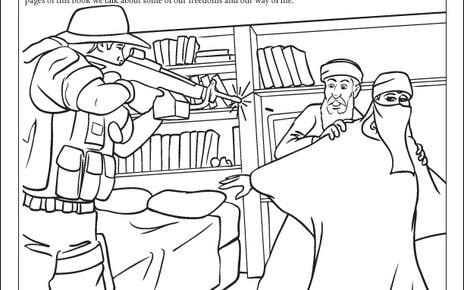 The Guardian reports on a new coloring book for kids, called We Shall Never Forget 9/11: The Kids Book of Freedom:

One page of the $6.99 book, which has been given a PG rating, shows Bin Laden hiding behind a hijab-wearing woman as he is shot by a Navy SEAL. "Being the elusive character that he was, and after hiding out with his terrorist buddies in Pakistan and Afghanistan, American soldiers finally locate the terrorist leader Osama bin Laden," runs the text accompanying the picture. "Children, the truth is, these terrorist acts were done by freedom-hating radical Islamic Muslim extremists. These crazy people hate the American way of life because we are FREE and our society is FREE."

The Council on American-Islamic Relations has condemned the book as "disgusting", saying that it characterises all Muslims as linked to extremism, terrorism and radicalism, which could lead children reading the book to believe that all Muslims are responsible for 9/11, and that followers of the Islamic faith are their enemies.

Finally, something the entire Teabagger family can enjoy.

Watch the publisher talk about the book, AFTER THE JUMP…

ps – does that frame seem familiar to anyone?