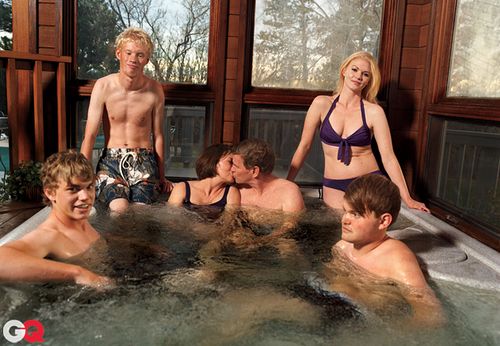 Ted Haggard will be swapping wives with Gary Busey on Celebrity Wife Swap, and for some unexplained reason they are shooting at the GLBT Pride Center in Colorado Springs, according to The Gazette:

The premise is simple: Haggard and Busey will swap wives for a short time. The first couple of days, the husbands make the rules for their new “spouses.” After that, the wives take charge. The fun could come from the conflict between Haggard and his reality wife (no word if it’s Busey's fiancée and mother of his new son, or one of his ex-wives), whom sources say is a spiritual woman but not a fan of organized religion.

On the surface, it might seem like an unlikely pairing, but there are several surprising parallels between Busey and Haggard.  Busey is a born-again Christian and active minister with Promise Keepers, and Haggard has returned to the ministry as pastor of St. James, a new nondenominational Christian church in Colorado Springs.

(via gawker image via gq profile)