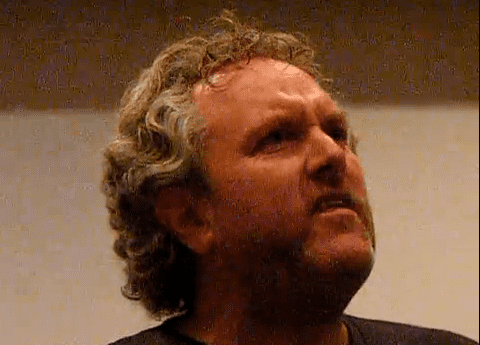 At a Tea Party function in Boston, a sweaty, pacing, unshaven Andrew Breitbart says he sometimes dreams of civil war.

"We outnumber (liberals) in this country, and we have the guns. (audience laughter) I'm not kidding."

And he purports to have the backing of a cadre within the U.S. military.

The video has just surfaced.

I'm under attack all the time. They call me gay, there are death threats… There are times where I'm not thinking as clearly as I should, and in those unclear moments, I always think to myself, 'Fire the first shot.' Bring it on. Because I know who's on our side. They can only win a rhetorical and propaganda war. They cannot win. We outnumber them in this country, and we have the guns… I'm not kidding. They talk a mean game, but they will not cross that line because they know what they're dealing with.

Then he says that unnamed senior military officials have personally assured him that they'll throw in with the right-wing in a civil war.

They understand that. These are the unspoken things we know, they know.

On the face of it, Breitbart's admission demands a congressional or criminal investigation. If he's implying that military officials have pledged their armed support to him and the right-wing, those officials are guilty of treason. If Breitbart is lying, he's diagnosable.

Watch his Strangelove moment, AFTER THE JUMP…