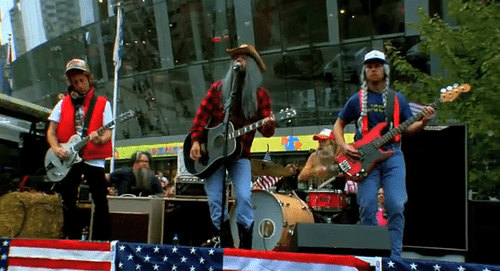 When the Westboro clan showed up to picket a Foo Fighters concert in Kansas City, lo, the Foo Fighters themselves pulled up in the back of a truck and gave them a performance of "Keep It Clean," which includes the lyric:

I've got a hankering for something, think I'm in the mood for some hot man-muffins.

Nice gesture, yes. But let's not forget that the Foo Fighters have vigorously promoted AIDS denialism. Mother Jones reported in 2000:

The multimillion-album-selling alternative rock outfit has thrown its weight behind Alive and Well, an "alternative AIDS information group" that denies any link between HIV and AIDS. In January, Foo Fighters bassist Nate Mendel helped organize a sold-out concert in Hollywood to benefit the group.

How many infected people at that Hollywood concert forwent meds? How many ended up dead? It throws the counter-protest into a new relief, doesn't it? On the one side, the church that insists almost everyone on Earth will burn in hell because of the gays. On the other, an alt-rock band that propagandizes for a lethal superstition – that AIDS is akin to the common cold. Clowns to the left, jokers to the right.