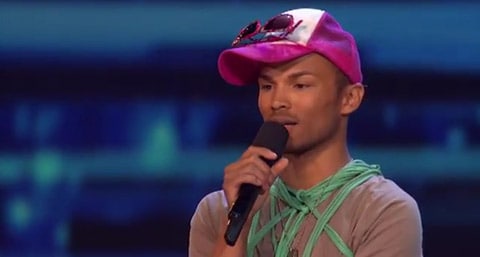 The X-Factor doesn't premiere until September 21, but at least one of the contestants is doing some pre-show publicity. Xander (above) sends us this note:

I auditioned for The X Factor for the first U.S. season and decided to do so with "personality" aka, give Simon a taste of his own medicine. As soon as he started getting lippy with me, I got lippy right back. Most of the contestants like to kiss his ass because they want so desperately to be on the show but I didn't care…I'm one of those New York gays that DOES NOT like to be disrespected, even when there is a reported "5-Million Dollar Contract" on the line. I wanted Simon to know that, 'you don't mess with the gays'. Paula Abdul and Nicole Scherziner were fierce as usual and loved me so that was all that mattered.

In any case, with the X Factor's Premiere right around the corner I figured it would be good to try to drum up some support for the show among the gay community… or at the very least give them one reason to tune in to the DALLAS audition just to see one hilarious audition from me where I let Simon have it. Don't get my wrong, I have no ill will towards him, it was just fun to take him on…on such a grand stage and the very show HE concepted. The look of shock on his face was priceless.

Watch the show's new 8-minute promo, AFTER THE JUMP…