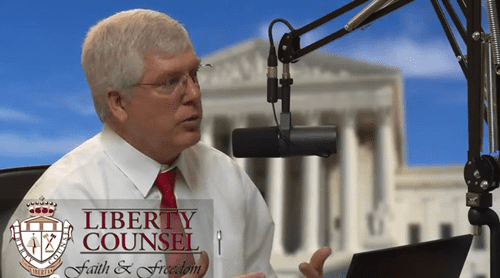 Early this month, unknown vandals threw bricks through the windows of a building where Americans For The Truth About Homosexuality was to host their "American Truth Teller" award ceremony. (The ceremony was to honor Scott Lively, a Christian who wants African nations to create state-run reeducation camps for homosexuals.) AFTAH's been freaking out ever since.

According to Barber, groups like the Southern Poverty Law Center are "fanning the flames" of anti-Christian violence by calling AFTAH a "hate group." Said Staver:

It's the same thing that happened in the Nazi Holocaust, where they start to just demonize and stigmatize, and then at some point in time you don't even think someone's human. We look at [the Holocaust] and our consciences are shocked, but if you look at how it ultimately began, where they began to demonize and dehumanize them — that's what's happening with these labeling of hate groups.

I've called on Southern Poverty Law Center, the Human Rights Campaign, a number of other homosexual organizations to publicly condemn this act of … gay motivated terrorism. So far, crickets.

What an ugly America Matt Barber inhabits! Where LGBTs and liberals all want to shatter Christian windows and break Christians' bones! (For the record, Matt, we don't.)

Watch this very informative episode of "Faith & Freedom" AFTER THE JUMP …