You may recall that last year Marine Commandant General James Amos expressed strong opposition to repealing "Don't Ask, Don't Tell", even suggesting that Marines could lose limbs in combat if they were forced to serve next to gays. 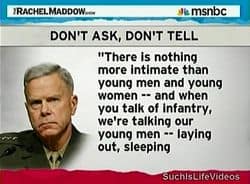 "I’m fine with it. I’m fine with it. I expect it to happen, I expect it to happen across the Marine Corps. And I mean, that’s part of the repeal of Don’t Ask, Dont’ Tell. I mean, that’s part of it. You can’t go half way. You can’t say we’re going to repeal it and you now can become public, but I’m going to restrict your behavior. We’re not going to do business that way."

Previous Post: « Jon Stewart Rips Republicans for Reaction to Gaddafi’s Death – ‘What the F**k is Wrong with You People?’
Next Post: Beard Hat Will Keep You Bearish All Winter: VIDEO »