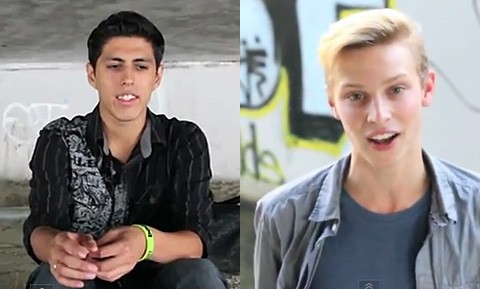 This morning I came across a new web video from ‘White Throne Films’ which stars Bobby Blakey, “a High School Pastor with a passion to help young people follow Christ with a love for God and his word” and two kids who reveal they thought they were gay but then found God, and apparently Blakey. 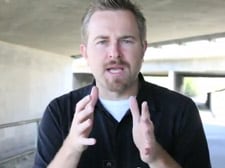 Blakey’s now using them to spread his damaging message that kids can “pray away the gay”.

Asserts Blakey: “If you don’t accept homosexuality, you’re not in with what’s happening today….In high school classrooms homosexuality is being aggressively promoted.”

He adds that he’s one of those gay-loving Christians: “Fringe groups of Christianity are making us look bad by just bashing these people [homsexuals], going after them in a way that is not with gentleness and respect…Why can’t we love the homosexual, and tell them the truth about their sin?” 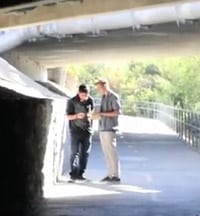 Then we meet Blakey’s underlings, two high school kids who furtively study their Bible together in a neighborhood underpass:

Says Tyler (top photo, right): “I can be made new. I can be washed and sanctified in the name of the Lord. It wasn’t a choice for me anymore. I knew that this was what I had to do. I couldn’t keep living in my homosexual lifestyle. I had to turn my life around and repent of that sin and be made a new creation.”

Tyler found another gay kid at school (top photo, left) and convinced him that praying away the gay was a good idea too.

Says Tyler’s recruit: “My conversation with Tyler was very life-changing for me. The next day I went to school after I was saved I noticed all the sinful things that people were doing that I used to do.”

The video was shot and produced  by self-described “slave of Christ” Luke Melrose who doesn’t look much older than the kids in the video.

Blakey’s preaching and doing a LIVE event this weekend at the Compass Bible Church website. According to his Twitter he’s stoked to be preaching there this weekend.

Tune in. I’m sure it will be fascinating.

Previous Post: « Streaker Dressed as Referee Incites Brawl Between Players at UCLA-Arizona Football Game: VIDEO
Next Post: Jon Stewart Rips Republicans for Reaction to Gaddafi’s Death – ‘What the F**k is Wrong with You People?’ »