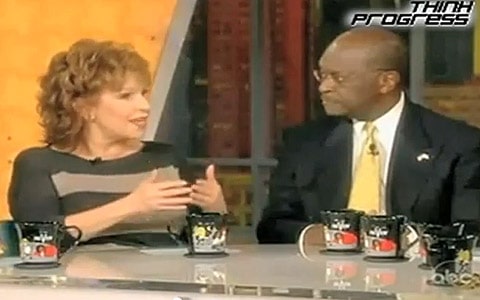 Herman Cain, frontrunner in many of the latest GOP 2012 straw polls, was asked by Joy Behar this morning how he could think being gay is a choice when so many people are vilified for it.

Said Cain: "You show me the science that says that it's not. Could be persuaded. Right now it's my opinion against the opinion of others who feel differently. That's just a difference of opinion."

Cain went on to add that he wouldn't allow his personal opinions to get in the way of running the country, and also repeated his intention to reinstate 'DADT'.

Think Progress LGBT adds: "The American Psychological Association, the world’s largest association of psychological professionals, describes sexual orientation as 'a complex interaction of environmental, cognitive and biological factors.' There is considerable evidence to suggest that biology, 'including genetic or inborn hormonal factors,” plays a significant role in a person’s sexuality.'"