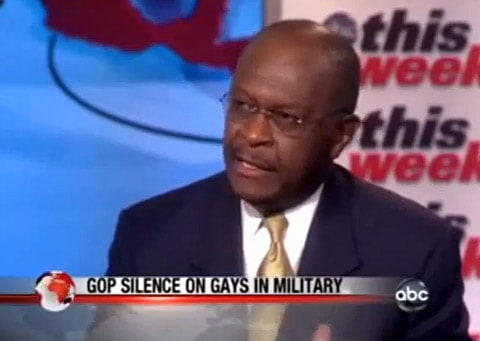 Penn mentioned Herman Cain's interview on ABC This Week with Christiane Amanpour in the round-up last night, but here's the video of Cain responding to the booing of the gay soldier, and the recently-revealed racial slur at Rick Perry's hunting camp.

Cain, winner of last week's Florida straw poll, when pressed, said that he should have spoken up against the booing. "I happen to think that maybe they were booing the whole ‘don’t ask, don’t tell’ repeal more so than booing that soldier…In retrospect, because of the controversy it has created and because of the different interpretations that it could have had, yes, that probably — that would have been appropriate."