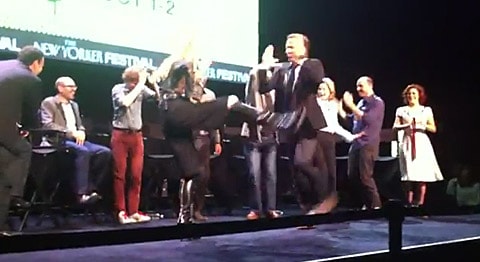 Over the weekend came news that Arrested Development would be returning to television for another season before the long-awaited feature film comes out:

On Sunday afternoon, Mr. Hurwitz tossed a few more crumbs to the “Arrested Development” faithful at a New Yorker Festival event that reunited him with the show’s ensemble cast, telling the audience that a movie was still in the works, along with a new set of television episodes that would serve as a prelude to the film.

At the end of yesterday's panel at the New Yorker Festival, the entire reunited cast got up to do the show's celebrated chicken dance.