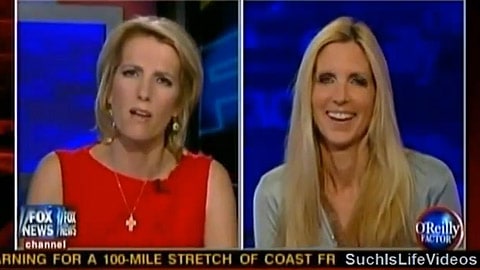 After suggesting that someone should have physically assaulted Chris Wallace for his line of questioning to Rick Santorum over the weekend in which he skewered Santorum with a quote from Colonel E.R. Householder, a World War II-era official whose comments were made in opposition to the racial integration of the military, Ann Coulter defended Santorum's position:

"I'm sick of people comparing gays to blacks. No, it's very different. What Santorum said is true. It's sexualization of the military. It's not someone being Black. Tell me how being Black is like being gay. You can see someone is Black. You can't see someone is gay and the precise policy we're talking about is whether they can go around announcing they're gay."