GQ Australia has apologized for an article they published about Taylor Lautner in which it explored rumors that he is gay, and asked whether director Gus Van Sant or screenwriter Dustin Lance Black hit on him at a recent business dinner. 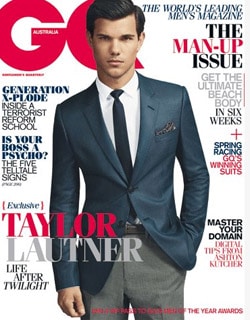 "No, definitely not," Hollywood's highest paid teen said when asked whether either Van Sant or Black made a pass. "I think they know I'm straight. But they're great guys. They're a lot of fun." Adding rather blandly: "It's not a coincidence that there was a writer, a director and an actor at dinner."

Black ripped GQ over the article:

Really Mr. GQ writer? I’m curious, will you be asking all of the handsome actors I’ve ever had the privilege of working with or meeting if I made passes at them as well? I’d love to be there when you ask Sean Penn that same question. Or, Mr. GQ writer, were you projecting your own unprofessional desires onto me and Gus? Perhaps? Or worse still, are you a homophobe? Above and beyond this clear attack on my character, I’m shocked that GQ would allow their writer to lean on the scurrilous, outdated stereotype that gay men are by nature sexual predators. I mean, would you have asked this same question if it were Diablo Cody and Kathryn Bigelow at dinner with Mr. Lautner? Leaning on lies, myths and stereotypes about gay people is hateful, harmful and outdated. It’s not the 1950s anymore GQ, it’s 2011 and it’s time to grow up.

We’ve seen some of the comments floating around regarding our recent interview with Taylor Lautner and apologise if anyone was offended by anything in the article. It certainly wasn’t our intention to paint anyone in the story as a sexual predator. The point we were actually trying to push was that Taylor is irresistible to virtually everyone – regardless of sexuality or gender. Hence the film crew cheering at his shirtless scenes while shooting Twilight, and Mark Wahlberg deeming him better looking than Leonardo Di Caprio.

Taylor is an extraordinary young gentleman, and we can’t wait to see him achieve even greater success in the future. That’s why he’s on our cover – because GQ Australia prides itself on offering readers the best possible advice and insights that help you be modern, successful gentlemen. Whether you’re into fashion, food, fitness, pop culture, politics, travel, technology or cars GQ Australia strives to provide you with top-quality editorial content that allows you to make your own discerning choices.