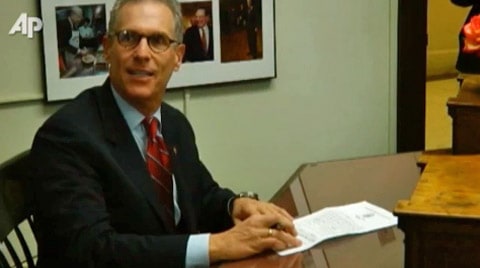 Although he realizes people will probably ask "Fred who?" when they see his name, Fred Karger today became the first openly gay presidential candidate to appear on the New Hampshire primary ballot.

Karger was the first candidate to file in person (a representative for Ron Paul filed paperwork earlier in the day), WMUR reports:

Karger showed up with a campaign sign, an oversized mock check and a real check to pay the $1,000 filing fee. He signed the filing paperwork and was the first candidate to scrawl a message on a poster that later will get reprinted in the state's "red book," a compilation of election results and political history.

"The fact that I'm here today in the secretary of state's office with Secretary Gardner, signing up and paying the filing fee to be in the New Hampshire primary is hugely significant for me personally, and for millions of gay, lesbian, bisexual and transgendered Americans who are looking for hope and looking for the opportunity to live their lives honestly," he said.