Kellan Lutz gives a great interview to Brandon Voss in The Advocate which reveals his comfort with gay men. Lutz talks about his roles in Twilight, The Comeback, and The Immortals. 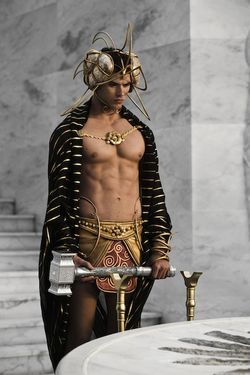 Says Lutz of The Immortals:

I love that our director, Tarsem, saw the gods as youthful. If you were a god, wouldn’t you rather be in your 20s or 30s as opposed to old and gray with a beard down to your ankles?

Check out more photos from The Immortals HERE.

Oh, they’re the best. I love them. When I meet gay fans out and about, they’re so great to talk to — and I’m big on hugging, because I’m from the Midwest. They’re just so energetic and loving. I’m proud to have those fans, and their support means a lot to me. I don’t want just girls coming to my movies; I want guys to come too.

And discusses the time one hit on him at a spa when he was naked in a hot tub:

We talked for about 15 minutes, and it clicked that he was probably hitting on me. By no means did I want to lead him on, so it was just kind of funny to me to realize that he was hitting on me — and doing a pretty good job. 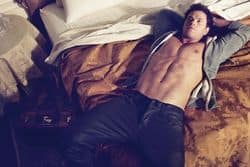 He also describes the moment his 'gaydar' turned on:

Growing up, I could never tell who was gay. Even in high school, I had friends that I didn’t know were gay until years later. I’d find out on Facebook or something and be like, “Oh, that explains some things,” or “Wow, no wonder they were so cool.” I remember going to a buddy’s house right when I came to L.A. He was showing me his place, and I asked, “Where do you sleep?” He’s like, “Here, in this bed.” He had a roommate, so I was like, “Where does your roommate sleep?” He said, “He sleeps here too.” I was like, “Oh, OK.” I’ve slept in the same bed as my brothers, and I’ve crashed on a friend’s bed, so it did not even cross my mind that they were gay. He called me up after I left his house and said, “Kellan, you handled that so well. I haven’t told many people, so thanks for being such a good person.” Suddenly, all this stuff started clicking, and everything made sense: Some guys I thought were just friends aren’t just friends! That’s the day my gaydar finally kicked in. We’re still the best of friends to this day. Now I have some really close friends who are gay.

And says you can live out your housewife fantasies with him, if you're lucky:

I’d prefer to live with gay guys. They’re the cleanest, and they just take care of stuff. Because I’m always away, coming home to a clean house means a lot to me.

Kellan Me Softly [the advocate]