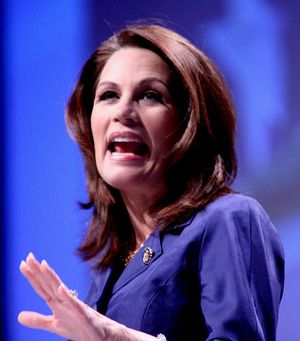 Michele Bachmann's New Hampshire staff has deserted her, according to CBS. One of them. Caroline Gilger, is defecting to to the Rick Perry camp.

Mrs. Bachmann, when asked about the desertion on a radio program, was doubtful:

In an interview with Radio Iowa, Bachmann expressed incredulity over news of the resignations, first reported by New Hampshire television station WMUR. "That is a shocking story to me," she said. "I don't know where that came from. We have called staff in New Hampshire to find out where that came from and the staff have said that isn't true, so I don't know if this is just a bad story that's being fed by a different candidate or campaign. I have no idea where this came from, but we've made calls and it's certainly not true."

That information [about the resignation] was conveyed to the people that are closest to Michele … If that information was not shared, that's unfortunate.

Bad form, Bachmannfolk. The candidate must be informed of these things.

So far, the deserters haven't explained why they've left the campaign. WMUR television blames Bachmann's seeming indifference to the NH primaries. (She's visited the state just twice during the campaign, preferring to focus on her homestate of Iowa.) That claim's uncomfirmed, though. Jeff Chidester says he'll have a comprehensive, official statement sometime soon.