Sam Stein at HuffPo reports that Mitt Romney was asked about his views with regard to family arrangements by a student at a town hall in Hopkinton, New Hampshire. The student asked what was wrong with being raised by two women, as she was (her mother and grandmother). 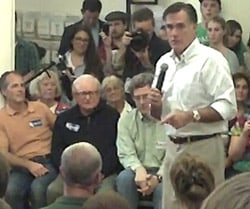 "I can say look, there are a lot of folks who are raised by one parent, through divorce through death or through having a child out of wedlock," Romney replied. "But my view is a society recognizes that the ideal setting for raising a child is when you have the benefit of two people working together and where one is male and one is female. I happen to believe that and that's the reason that I think as a society we say, 'You know what? We are going to call marriage what it has been called for 6,000 years.'"

So why not support civil unions? "What I would support is letting people who are of the same gender form, if you will, partnership agreements," he replied. "If they want to have a partnership with someone else and have, as a result of that, such things as hospital visitation rights and similar benefits of that nature."

Said the student: "I was seething. I didn't want my disdain to be apparent on my face. His answer was a little odd because I grew up with two women as parents," she continued. "I didn't grow up with gay parents. But it was still two women."