Police arrested more than 100 people last night at a gathering of protesters associated with Occupy Boston, trampling American flags of U.S. military veterans organization Veterans for Peace, and destroying tents that had been set up in Dewey Square Park. 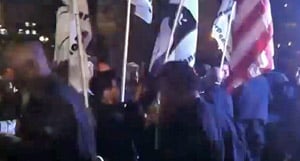 "Before the arrests and clearing of the park, the police surrounded it, lining up over a dozen paddy wagons along one side. They told members of the media to leave and not to film proceedings. After a five-minute warning to disperse, police moved in, first arresting the peacefully protesting veterans — who included a female veteran of the Iraq War, according to the Boston Phoenix — and then other Occupy Boston activists. According to Boston Police Commissioner Ed Davis, about 100 arrests were made."

Much more at FireDogLake.

Previous Post: « Group Working to Repeal California’s LGBT History Bill Says ‘It is Doubtful’ They Will Get Enough Signatures
Next Post: NYC Drag Ball Project in Development at Showtime »