The Presbyterian Church USA is set to ordain its first openly gay minister this weekend, the Journal Sentinel reports: 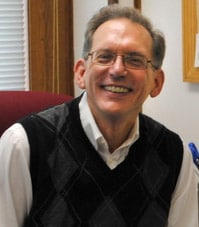 On Saturday, Anderson, of Madison, will become the first openly gay minister ordained by the Presbyterian Church U.S.A. since the denomination amended its constitution this year to allow it.

Hundreds of friends and supporters, and possibly some protesters, are expected to turn out at Covenant Presbyterian Church for what is being called a watershed moment in the life of the denomination. It is also the culmination of one man's deeply personal spiritual journey.

"I have felt a call from God to serve as a parish pastor since I was a sophomore in high school," said Anderson, 56, a near-lifelong Presbyterian who has spent the last eight years as executive director of the Wisconsin Council of Churches. "When I came out and left the ministry, I never thought in my lifetime this day would come," he said. "This has been 20 years of God surprising me, really."

Anderson is being ordained by the John Knox Presbytery, which consists of 60 congregations in Iowa, Minnesota, and Wisconsin.