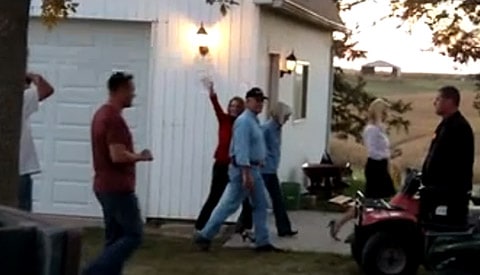 Michele Bachmann attended a fundraiser thrown by Iowa's leading anti-gay group The Family Leader at a pumpkin farm in Iowa last night, but canceled her scheduled speech outside the barn because of 60 protesters that had shown up from Iowa's Grinnell College, CBS News reports: 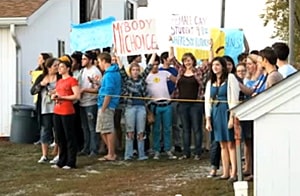 The students joined the crowd in the barn waiting for Bachmann to speak, while the lawmaker's staff huddled, apparently concerned about the protestors, who carried signs saying, "Have my gaybies" and "My body, my choice" and "Female Gay Student 99%, where's my future?" The police arrived and cordoned off an area outside the barn where the Grinnell students were made to stand.

An hour and a half after the event was scheduled to begin, Bachmann came out of the nearby house, took a quick tour of the farm, fed some goats and fielded a couple questions from reporters about why her speech was canceled. She said the event was supposed to be private and that she wanted to be able to talk with the people who had paid to be part of the $25-a-head fundraiser.

Bachmann then walked to a van, waving to the students as some of them yelled to her.

Following is a video report from the Grinnell University newspaper S & B and another in which Bachmann is questioned about why she won't speak with the students there on the farm. Bachmann says that it was always planned to be a private event.

More videos of the protesters:

Bachmann talks about the protesters: