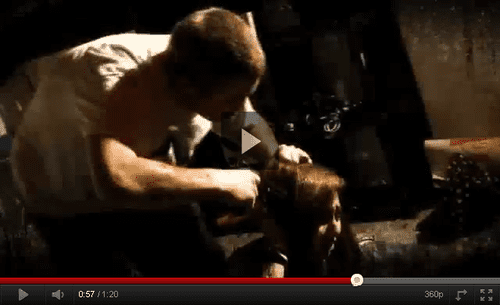 The "Hell House" is one of those annual inevitabilities, like the January 1st hangover, that is as nauseating as it is persistant. Every October, Evangelical churches open up Hell Houses around the country, elicit some rage in the press, and close up shop by mid-November. In theory, the Hell House is a Christian alternative to traditional haunted houses; a healthy and wholesome affair that brings together families, boosts the attendees' moral fiber, and provides a little light entertainment.

Instead of vampires and werewolves, guests are treated to scenes such as a young girl having an abortion, a gay man suffering from AIDS, a teen dying in an auto accident who failed to give his life to Christ. In each scenario, these presumed sinners are tormented by actors dressed as demons. The implication, none too subtle, is that each deserves both their suffering and their one-way ticket to damnation. The gay man, molested by his uncle as a child, chose to have sex and contract HIV. The teen girl chose to get drugged at a rave, raped, and become pregnant. The boy in the car wreck chose hell because he refused to listen to his parents' religious teachings. The message of these hell houses is that the same fate awaits us all. But wait! There's hope. These terror tours usually end with a glimpse of heaven and the opportunity to give one's life to Jesus. [Emphasis added.]

Not incidentally, Brian Kirk is himself a Christian minister, and his objection isn't just to the psychological torture that is the Hell House's metier. He's also bugged by the irony implicit in the whole Hell House project. In response to the depravity and darkness they perceive in American culture, Kirk explains, the Evangelicals who operate Hell Houses have created an entertainment that revels in darkness and depravity to a degree undreamt of by the culture's most unabashed darkness-peddlers. Writes Kirk:

Perhaps most telling … is the apparent excitement expressed by the Christian teens who help to organize and present the gruesome scenarios. It's clear that the youth involved are partially motivated just by the sheer enjoyment of getting to play out the violent tableaux. At the end of the Halloween season, Trinity Church actually hosts a dress-your-best ceremony where awards are presented for the best "abortion girl" performance, best "girl raped at the rave" performance, "best demon," and so on. The cavalier attitude they take to the whole affair is disturbing.

See an ad for a Hell House AFTER THE JUMP …